One of the world’s largest beer manufacturing plants in Bannur, India was experiencing regular PROFIBUS communication failures in the packaging division, resulting in noticeable production loss. The maintenance team was facing intermittent bus communication failures. They were spending a significant amount of time troubleshooting the issues, which had substantially increased associated maintenance costs. 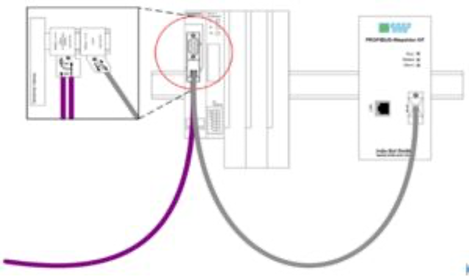 The company Utthunga was contracted to solve the problem. A PROFIBUS-INspektor NT tool, a permanent monitoring tool from the company Indu-Sol, was installed in the main control cabinet, where it continuously monitored the logical telegram exchange when the plant was running. The error in the network was quickly pinpointed. The diagnostic messages were analyzed, along with real-time data transmission.

Monitoring tools were installed in each controller (PLC) and ran continuously for twelve hours. The issue of repeat telegrams was identified which, resulting in certain PROFIBUS slaves not responding after a predefined time.

It was concluded that the network failures in the plant occurred due to not following the PI standards concerning:

Utthunga recommended the client install a 5 channel repeater (Indu-Sol’s MULTIrep X5 Repeater) in the network for proper PROFIBUS segmentation. A test run using the repeater clearly indicated the need for a change in the architecture. After using the repeaters to split the network into four segments, the voltages and signal quality of the network was enhanced. A photo of the repeater installed on the line is shown.

The following tests show the changes in the readings:

Poor shielding and grounding installation were also discovered during the inspection of some Variable Frequency Drives (VFDs). This lead to current leakage, which in turn affected the bit transition and then intermittent failures. Proper grounding avoids harmonics and reflections, stabilizing the communications.

After a complete PROFIBUS network audit, the customer is now able to: